Instead of spending time in Tokyo city, I decided to plan day trip out from Tokyo for few days this time. E & I did some research and decided to explore off the beaten path destination. So, follow my Japan travel posts for the updates. The first destination is Kamakura day trip. 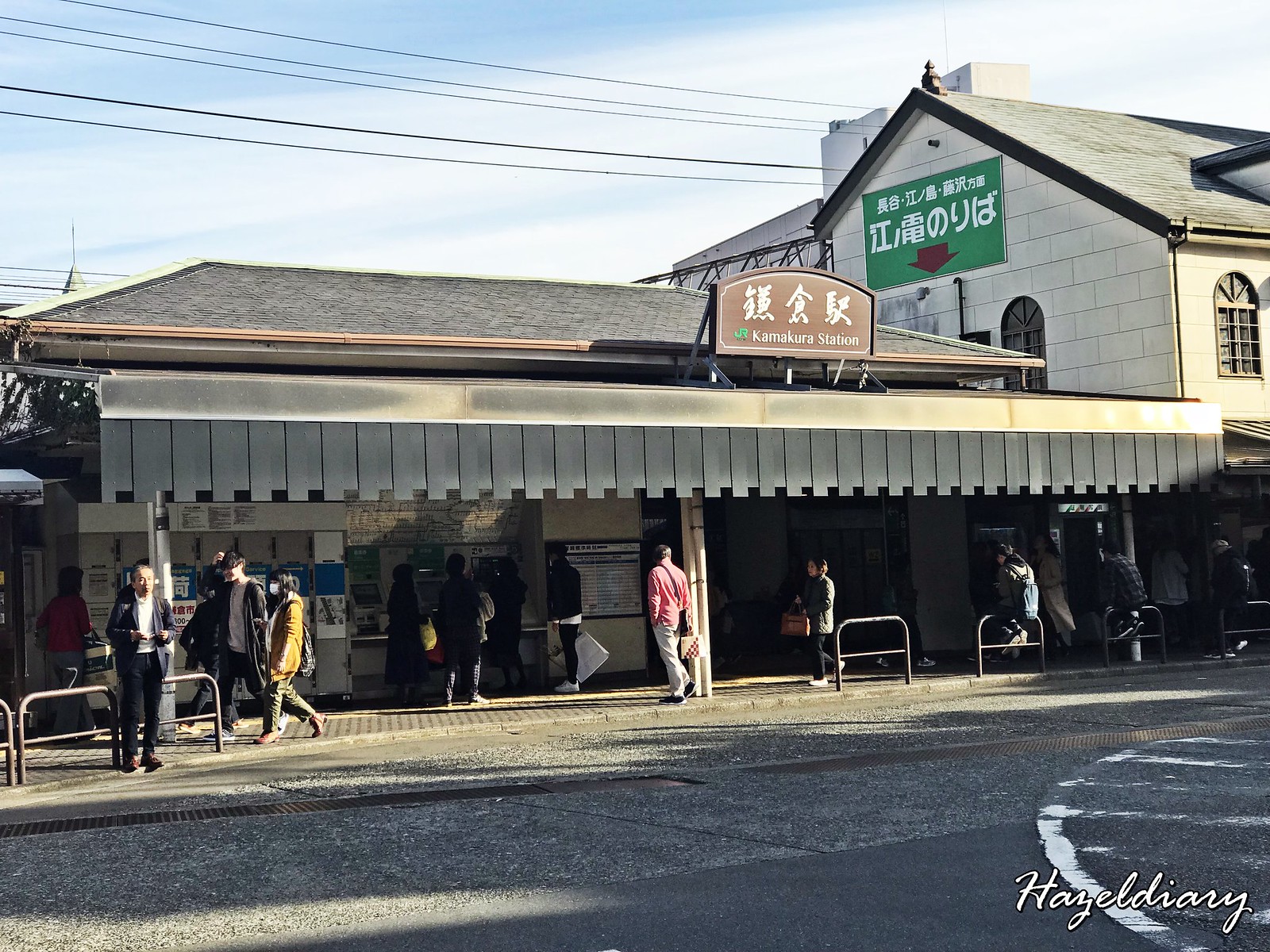 WHERE and WHY KAMAKURA?
Kamakura is a seaside Japanese city just south of Tokyo. The political center of medieval Japan, modern-day Kamakura is a prominent resort town with dozens of Buddhist Zen temples and Shinto shrines. Its most recognizable landmark is the Kotoku-in Temple’s Great Buddha, a roughly 13m-high bronze statue still standing after a 15th-century tsunami. Yuigahama Beach on Sagami Bay is a popular surfing spot.
*Info taken from google search*

Kamakura is also said to be one of the popular day trip areas for the locals (Tokyoties). And true enough most of them are locals when we arrived.

HOW TO GET TO KAMAKURA FROM TOKYO? 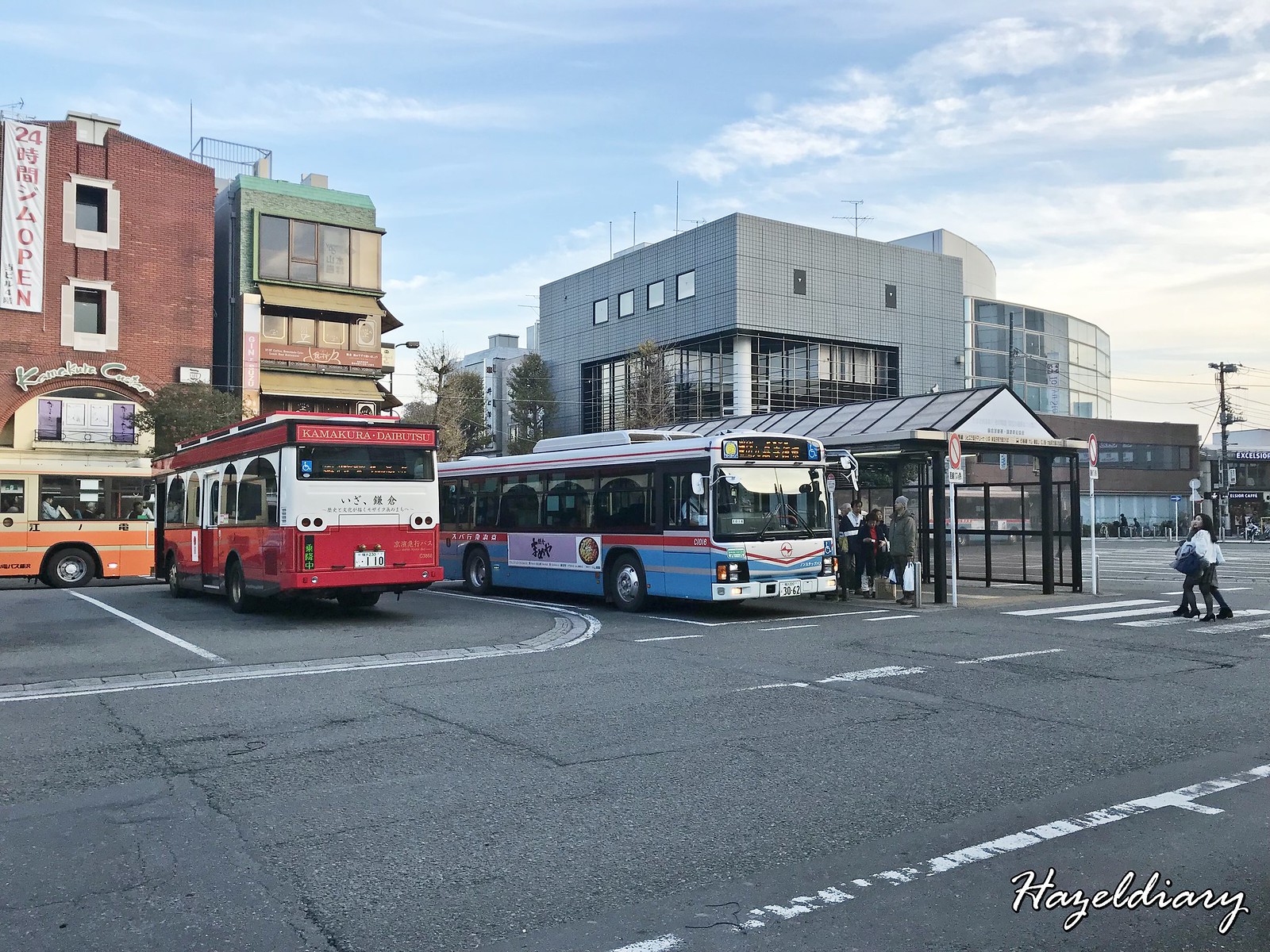 The journey from Tokyo to Kamakura Station takes approximately 90minutes. We had a 5-Day JR East Pass from KKDAY to use for this trip. This benefits for travellers to Japan and it is a multi-use discounted ticket that is valid for travels on all JR national trains in Japan, including rides on the Shinkasen bullet trains and even Narita express. But note that we did not purchase the full Japan Rail (JR) Pass. This is only JR East Pass that covered (Nagano-Niigata Area). We took it to Kamakura Station.
Also,Google Map is your best friend when it comes to travelling. We used google map to check on the direction, time and fare value throughout our trip in Japan.

You can pre-purchase the JR East Pass here.

Things to do in Kamakura
Explore Kamakura Komachi-dori Street 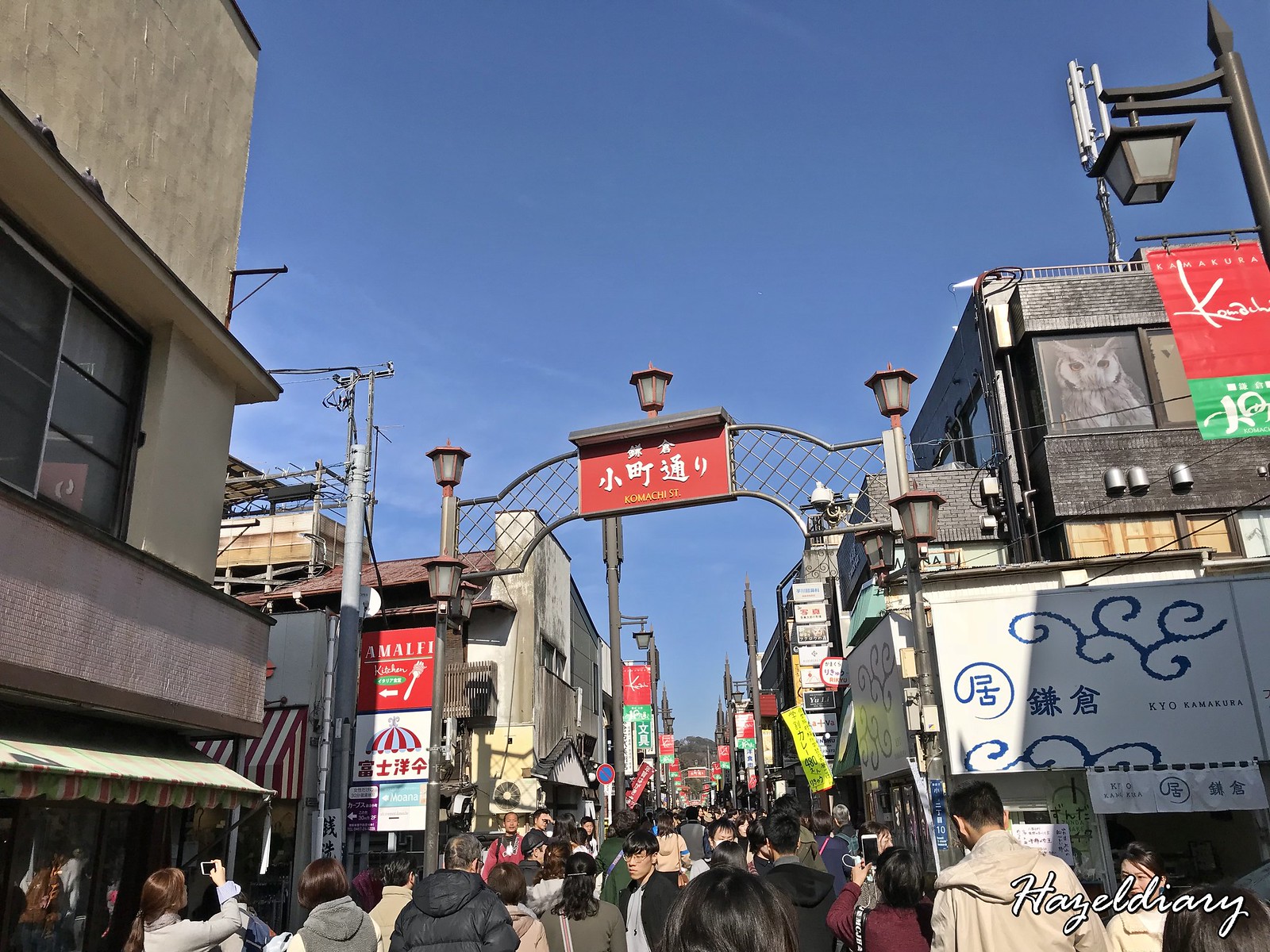 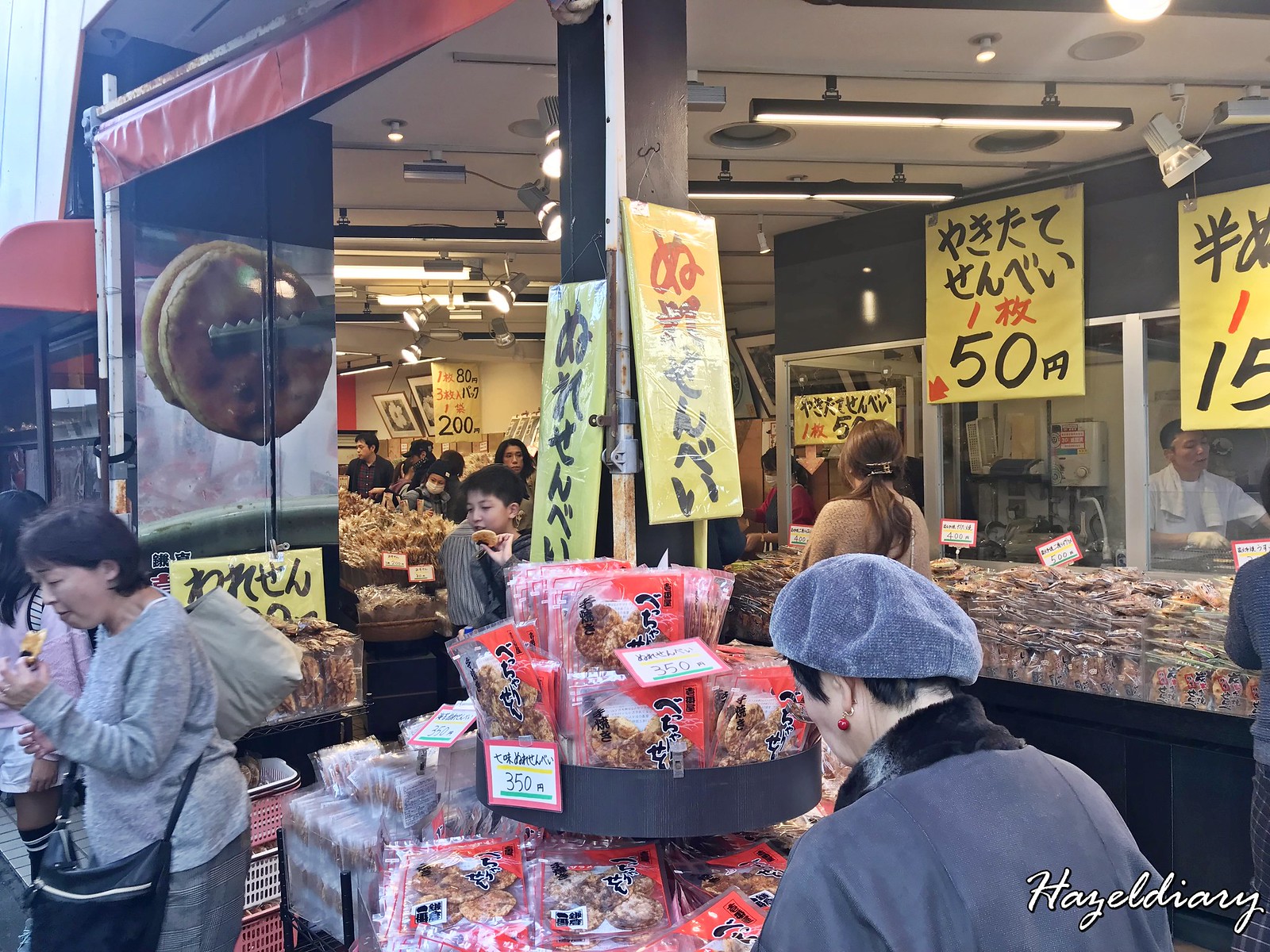 It is a walking distance from east exit of Kamakura Station. Komachi-dori starts at the red torii gate and runs to Wakamiya-oji, the street that leads to the Tsurugaoka Hachimangu Shrine. There are boutique fashion stores, souvenir gift shops, restaurants, bakeries and cafes along the streets. 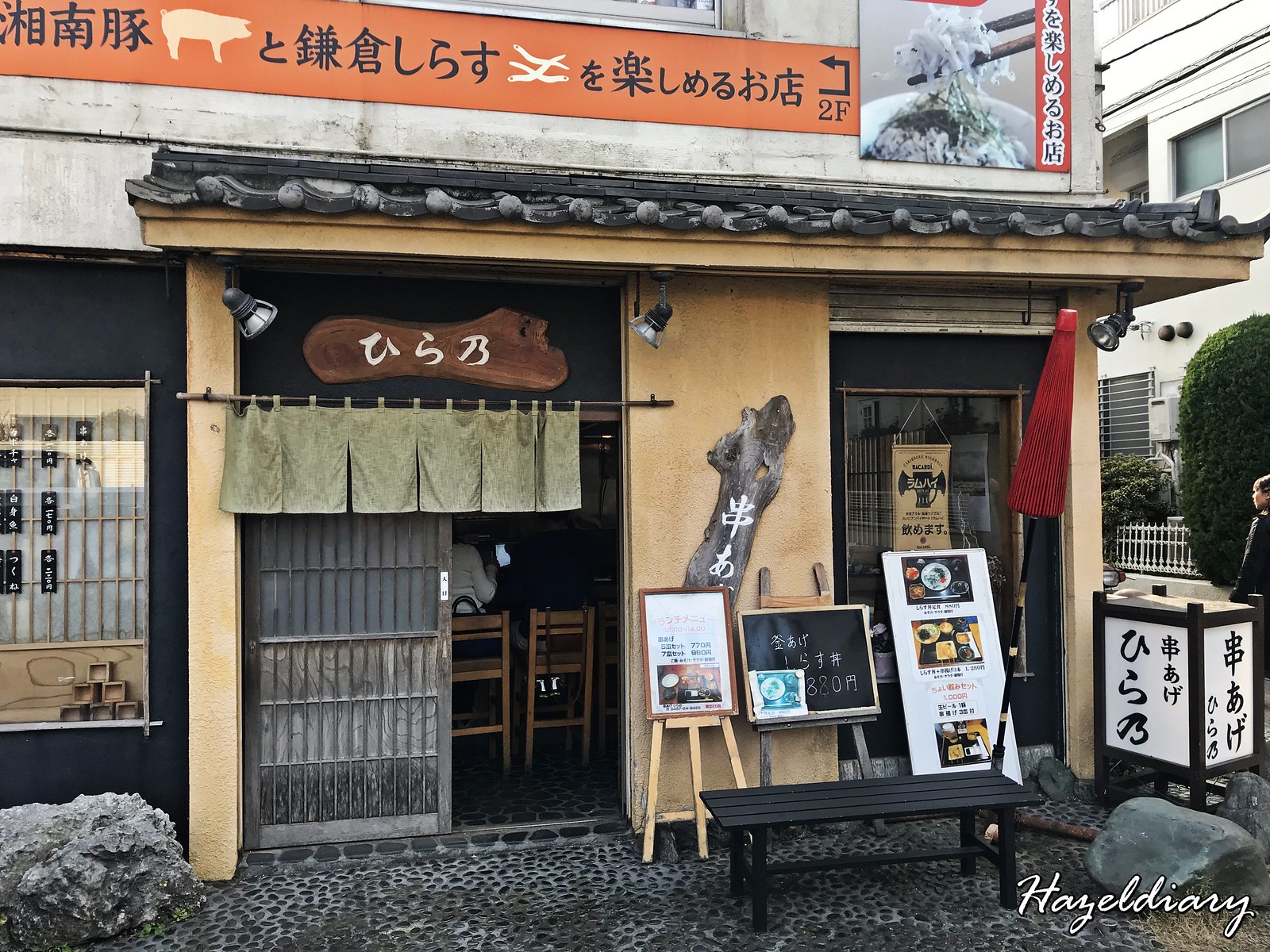 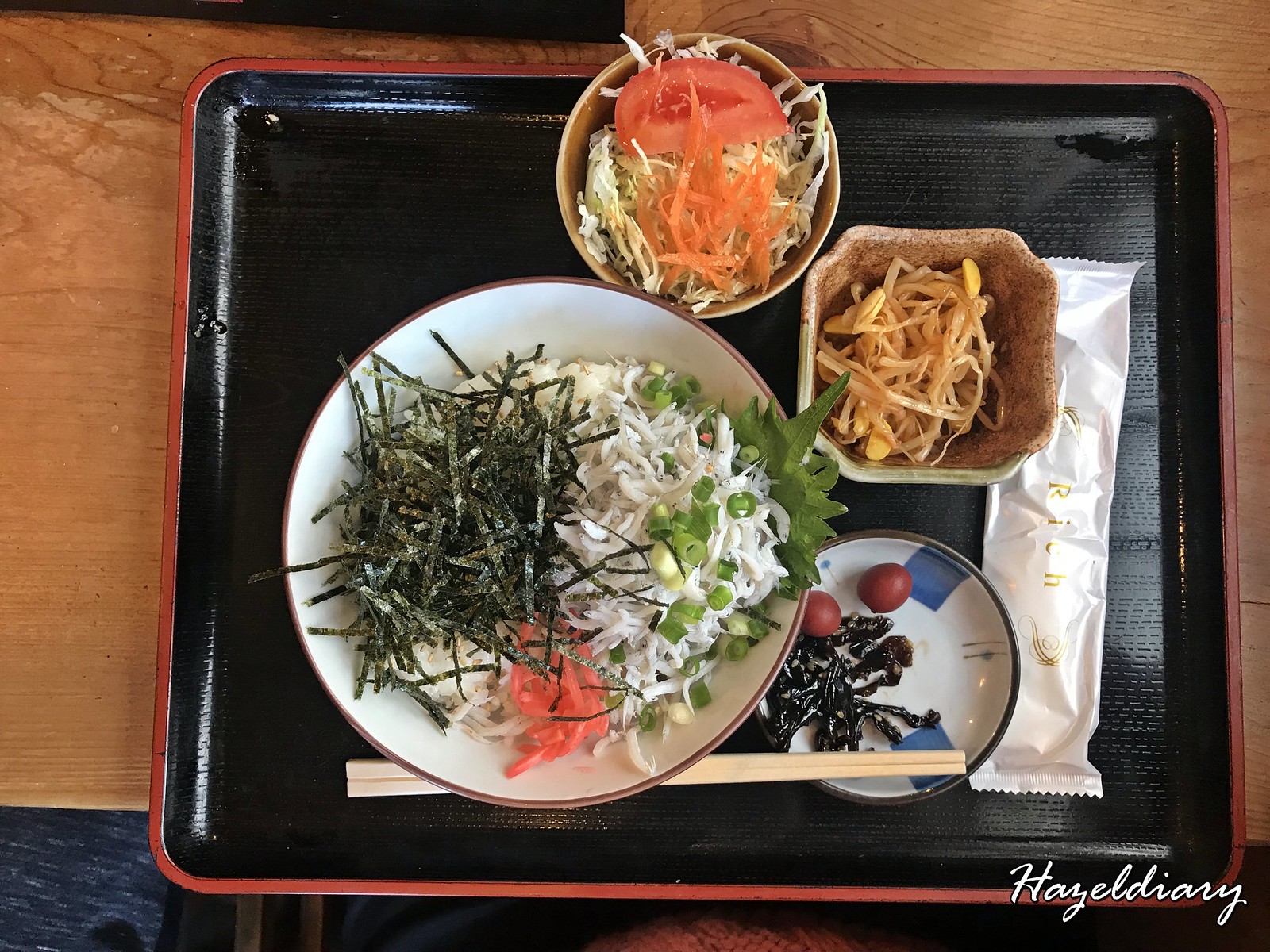 We settled our lunch at one of the local restaurants there. And the must-try food in Kamakura is Shirasu.”Shirasu” is the generic name for juvenile sardines, sand lances, and herring. They are in season from April to December and is available in most of the restaurants in Kamakura. The famous dish is shirashu-don and so we did had one with fresh shirasu seasoned with little bit of wasabi and soy sauce all over a bowl of Japanese rice along with miso soup and Japanese pickles. 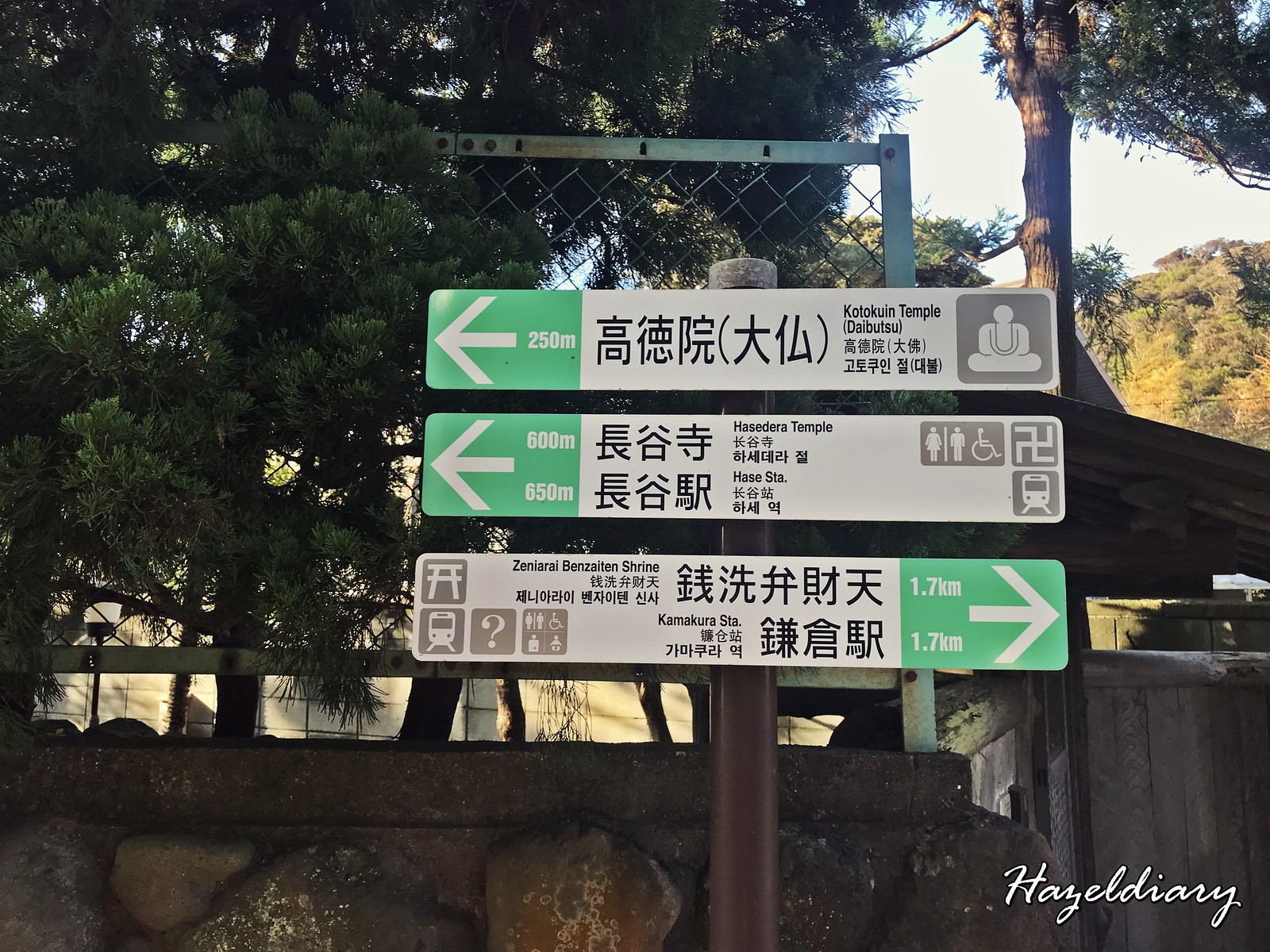 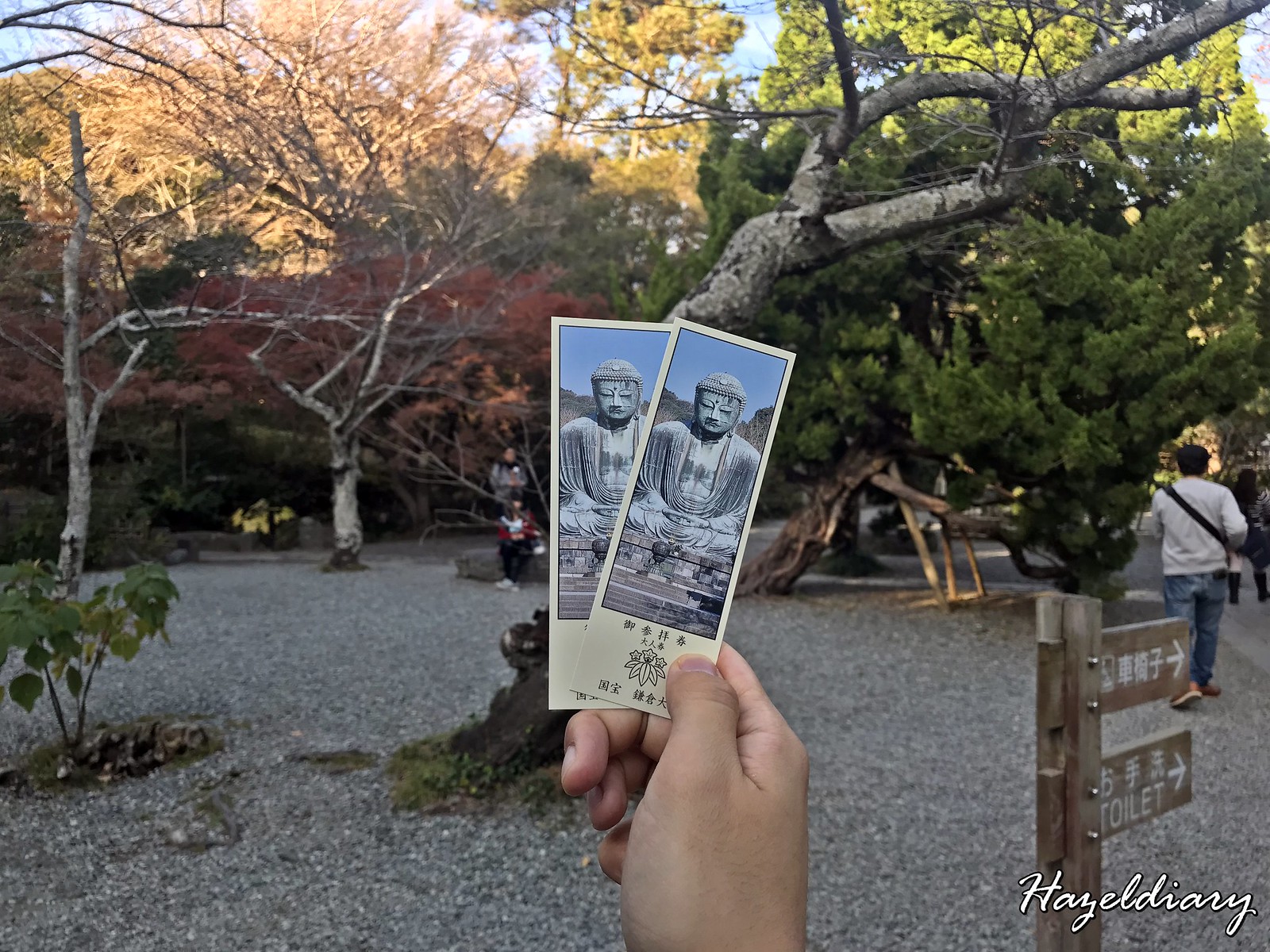 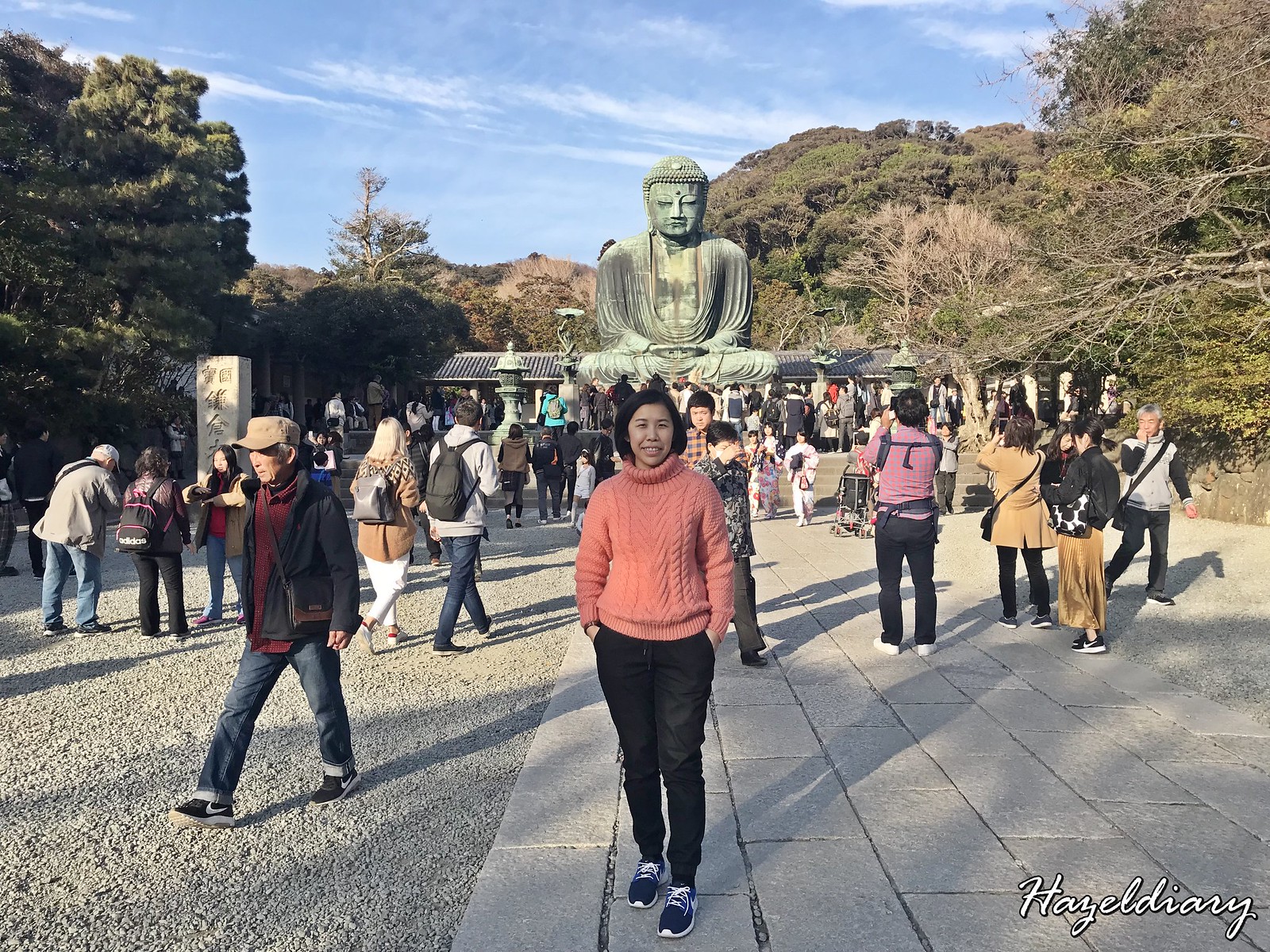 Since it was a cooling weather, we walked 30 minutes to explore Great Buddha of Kotoku-in Temple. Alternatively, you can take bus from Kamakura Station to the temple. There was quite a number of tourists when we arrived in the afternoon. 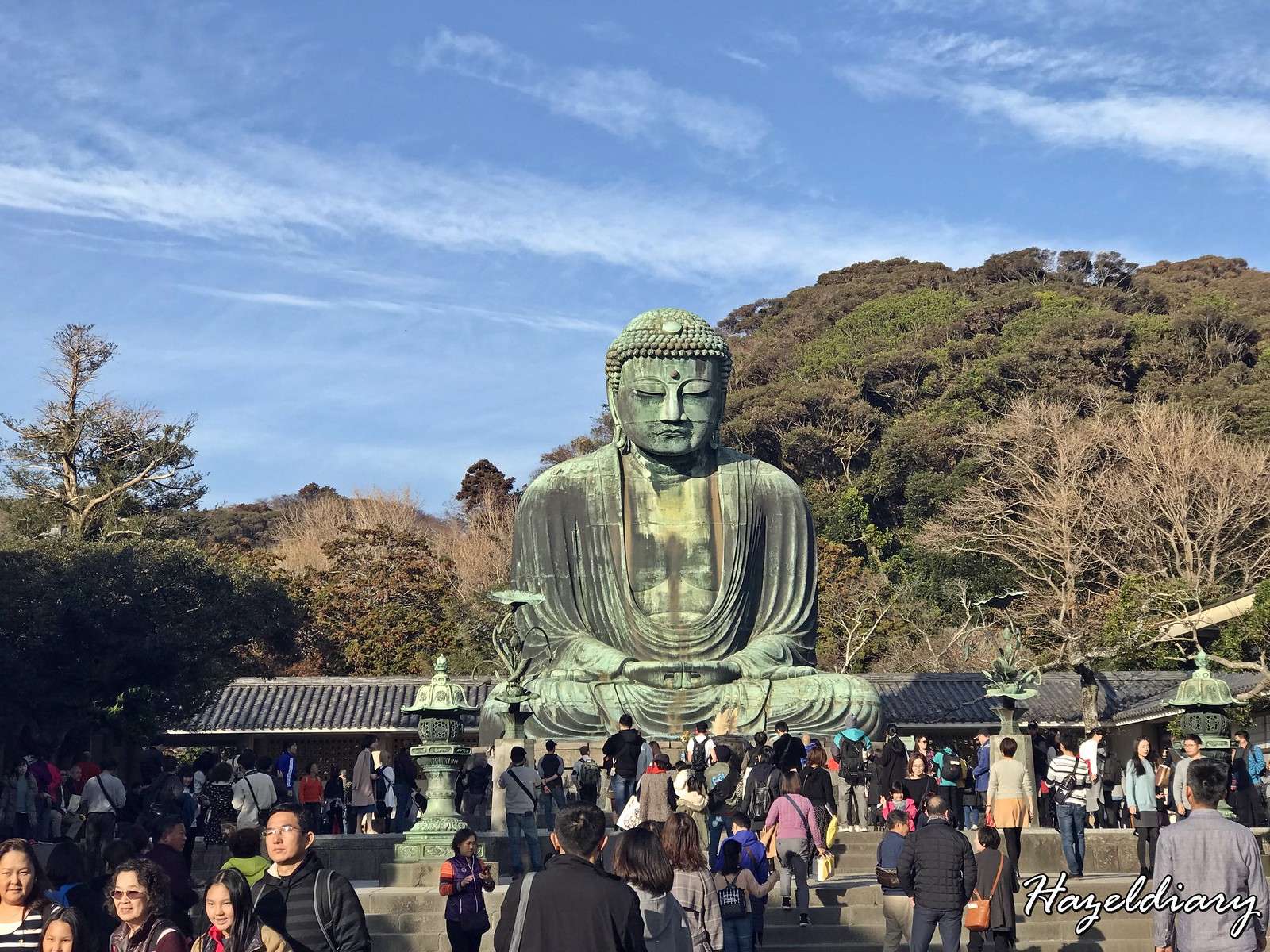 About Great Buddha of Kamakura
The Great Buddha of Kamakura is a monumental outdoor bronze statue of Amitābha Buddha at the Kōtoku-in Temple in Kamakura, Kanagawa Prefecture, Japan. The bronze statue probably dates from 1252, in the Kamakura period, according to temple records. It was preceded by a giant wooden Buddha, which was completed in 1243 after ten years of continuous labor, the funds having been raised by Lady Inada (Inada-no-Tsubone) and the Buddhist priest Jōkō of Tōtōmi. That wooden statue was damaged by a storm in 1248, and the hall containing it was destroyed, so Jōkō suggested making another statue of bronze, and the huge amount of money necessary for this and for a new hall was raised for the project.[1] The bronze image was probably cast by Ōno Gorōemon or Tanji Hisatomo, both leading casters of the time. At one time, the statue was gilded. There are still traces of gold leaf near the statue’s ears.
The hall was destroyed by a storm in 1334, was rebuilt, was damaged by yet another storm in 1369, and was rebuilt yet again. The last building housing the statue was washed away in the tsunami resulting from the 1498 Meiō Nankaidō earthquake, during the Muromachi period. Since then, the Great Buddha has stood in the open air.
*Info from Wikipedia*

Note: There is an entrance fee of 200 Yen and additional 20Yen to visit inside of the Great Buddha statue. 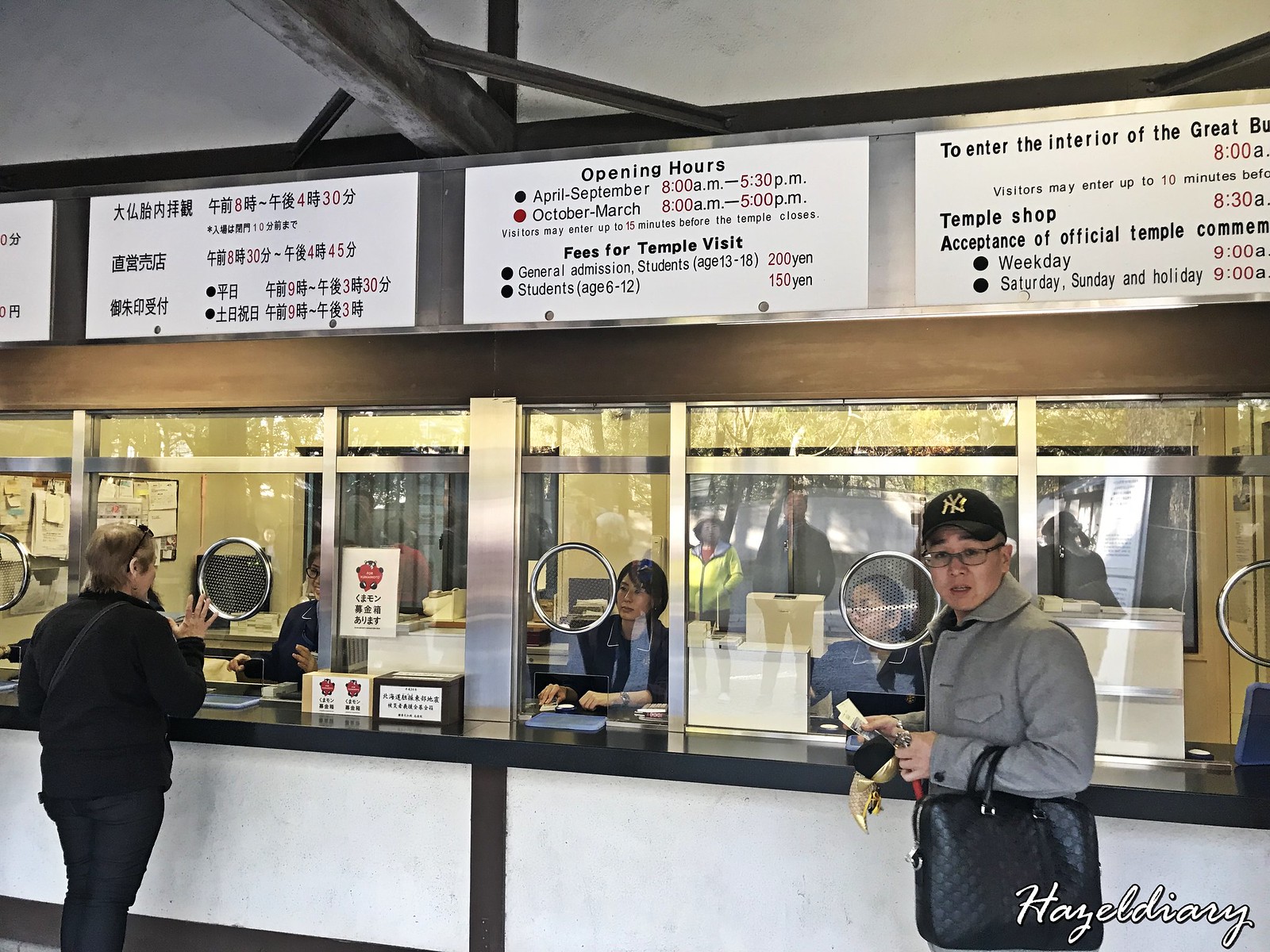 The sky turns dark after 4pm so we headed back to the station and took the train back to Tokyo. If you have a bit more time, there are various museums and parks in Kamakura that you can check it out. More about Kamakura from Japan Guide .

We did 1 minute video of our Day Trip to Kamakura and hope you like it!